When I moved from Houston to rural New Mexico one of the first things I wanted to do was get chickens. I’d grown up with chickens and missed the companionship of hens and (apparently) the persecution of roosters.

We’d only had birds for about a year when a strange thing started to happen: people began to stop by our place and ask if we would take in “stray” or unwanted birds. Of course I said YES: the more the merrier! At one point we had over 100 birds. We took in anyone who needed it and ended up with lots of chickens, two emus, a llama (yep, not a bird—we figured that out pretty quickly!) turkeys, geese, peacocks, and ducks. Oh, and LOTS of roosters.

Back to the beginning.

Building the coop was the easy part. Before we could even think about getting birds we had to work on our fences. Bears, coyotes, weasels, skunks, raccoons and—especially—wild dogs are some of the predators we face.

We ended up making a series of concentric enclosures. The inner was 40 feet by 8 feet was entirely enclosed and the wire sides were buried down a foot! Yes, it took a lot of time and digging, but it would provide safety at night and when we couldn’t be here.

The second ring had 6 foot fences buried a foot, but no cover.

And the third ring enclosed the whole property.

Here is a picture of the second enclosure (you can see the initial enclosure within):

Anyhow, when I felt everything was secure enough I placed an order from a local hatchery in Albuquerque. I wanted birds that would do well in our high desert climate, which has temps between -22 and 100.

Here are the first girls:

These ladies are called Giant Cochins—not so giant here. 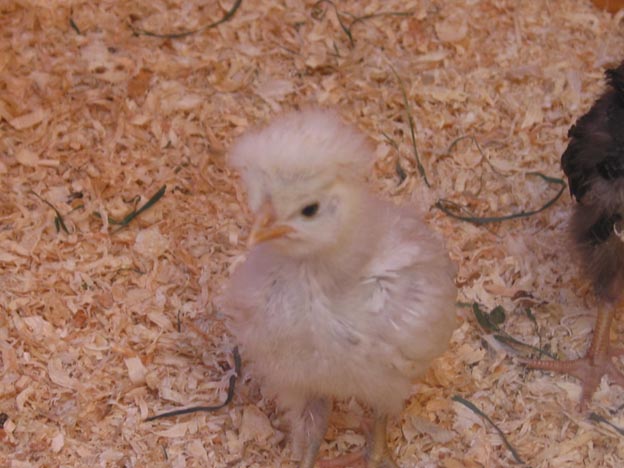 This is Drusilla, a Polish Crested

When we started keeping birds we were still running our 8-room bed and breakfast. Our guests loved the animals so we set up a bird-watching area and also had designated times when we shut the gate to the property and let everyone run amok. Our roosters were a bit, er, frisky and more than once we had to rescue terrified guests from this 4-pound monster: 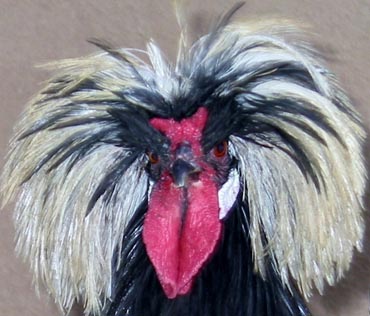 This is Bernard, a rooster who was supposed to be a hen. He was our first roo and a feisty little bundle he was!

Domestic fowl were not the only critters we accepted. We also had some more exotic guests. . . Thing One and Thing Two (see below) came from a man who hadn’t realized emus grew so large. He was keeping them in his garage in Albuquerque so we paid to have them brought up to Taos in a horse transport trailer.

The photo below shows the Things with an empty yogurt container. It turns out male emus are the ones who incubate the eggs and raise the young. Well, the second year the Things were here I couldn’t find them. I was terrified they’d somehow gotten out. I finally found them at the far end of the property where there are trees and a small river. They were lying flat on the ground, necks stretched out and trying to hide from me. They really blended in and looked just like dirty, ragged tumbleweeds in the snow.

Anyhow, one of them had built the saddest nest you’ve ever seen in your life and was trying to incubate a yogurt container. Of course they were doing this during the Australian summer, so here it was three feet of snow and 10 below.

I took away their yogurt container and ten minutes later they had forgotten all about it. Until the next year….

Thing 1 and Thing 2 with their baby yogurt container 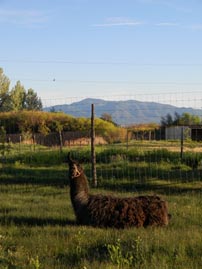 Elvis came from a local llama rescue that was overwhelmed with llamas after the price of hay went up and people who were raising them for fleeces could no longer afford to feed them. So people turned hundreds of llamas loose in Colorado and New Mexico; naturally the llamas went looking for food and ended up grazing on farms, where farmers were shooting them.

Llamas are very smart animals that come with their own set of needs, but that’s a story for another time. . .

Below I’ve included a few pictures of some of the critters we’ve been lucky to host: 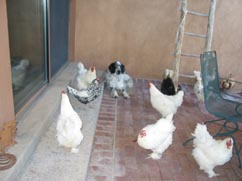 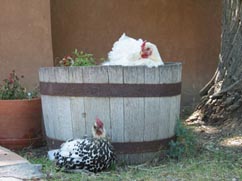 Can you spot Mimi in the Russian Sage? 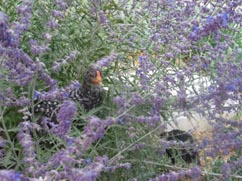 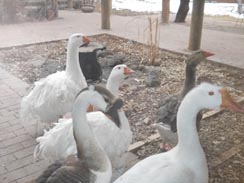 Snarky, Sid, & Nancy in the water

An uninvited guest in the hen house (a harmless bull snake)

Minerva sharing some chips and salsa with the girls 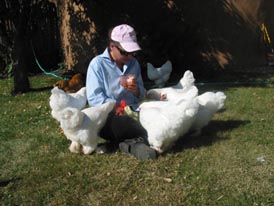 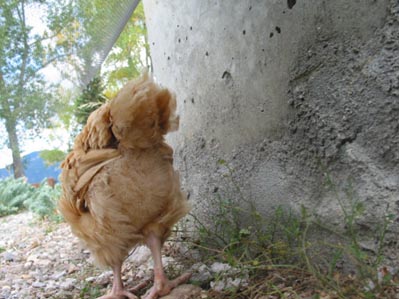 He could be her ruin

Hugh Redvers is supposed to be dead. So the appearance of the sun-bronzed giant with the piratical black eye patch is deeply disturbing to Lady Daphne Davenport. And her instant attraction to the notorious privateer is not only wildly inappropriate for a proper widow but potentially disastrous. Because he is also the man Daphne has secretly cheated of title, lands, and fortune.

She could be his salvation

Daphne Redvers’ distant, untouchable beauty and eminently touchable body are hard enough to resist. But the prim, almost severe, way she looks at him suggests this might be the one woman who can make him forget all the others. His only challenge? Unearthing the enemy who threatens her life . . . and uncovering the secrets in her cool blue eyes.

Praise for the first book in The Outcasts series

One thought on “Minerva’s Bird Sanctuary by Minerva Spencer”