One of my most favorite people was my cousin Susie. She was quite a bit older than me, but I still loved spending time with her. She was open and honest and always had a smile on her face. But Susie wasn’t without her own challenges. She had been left in the birth canal too long and her oxygen was cut off before she even made it into the world. She was born with Down syndrome and consequently brain damage. And she was one of the most kind and loving people I’ve ever known.

Susie didn’t see herself as having limitations. Mainly because she didn’t. See them or have them. (Or maybe if by not seeing them, they weren’t really there at all?) Nothing could stand in her way. She read her Bible every day, loved her mom, her siblings, and her dog, and sang specials at church nearly every week though she was born with a cleft palate and was hard to understand. She was an inspiration to all who met her. And I suppose it’s fair to say that she was my inspiration for Loving Jenna.

Unlike Susie, Jenna Burkhart had a swimming accident that left her with the mind of a child and an over-protective family. But when she moves to Wells Landing and meets Buddy Miller things start to change for her.

Buddy has been a long-standing character in the Wells Landing Series. Like my cousin he was born with Down syndrome and adores his family, especially brother Jonah. Buddy’s kind and sweet and has a habit of telling the truth even if others aren’t quite ready to hear it. But most of all, he’s tired of being told he’s different. When he meets Jenna for the first time, he thinks he’s seen an angel. She’s so beautiful and perfect. But he knows that she would never feel the same about him.

Then he finds out that her brain is a lot like his, and they decide that God has brought them together so they will both have love in their lives, more love, real love.

You could say it was practically love at first sight, but there’s one big problem. Their families. Okay, that’s two, but you get it. Their respective families thought that they would each live at home for the rest of their lives, but when Buddy and Jenna meet, they see the future in each other, even if their mothers can’t.

I’ve always had a soft spot for the underdog. I love stories where good triumphs, people overcome, and faith prevails. Which makes sense as to why I’m so excited about this book. After all, Buddy and Jenna fall in love and plan for a life together than no one thinks will be theirs. Though if Buddy and Jenna are underdogs, someone has yet to convince them. And I hope they never do. 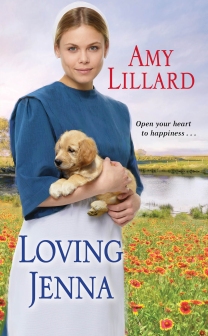 In this new series set in the beloved Oklahoma Amish community of Wells Landing, three generations of women challenge themselves and each other to make a fresh start in faith, family—and love.

Jenna Burkhart is tired of being “special” and hearing about what she can’t do. Even though she suffered a head injury in a childhood swimming accident, she wants a life of her own just like any Amish woman. But now that she, her mamm, and her mammi have moved to Wells Landing, she’s having a hard time fitting in. . . . Until she meets Buddy Miller, a boy just like her, who gives her the confidence to reach for the impossible . . .

Like Jenna, Buddy is used to being the boy no one expects much from, the one people see as “different.” Still, being around Jenna’s lively, kind-hearted ways makes him strive ever-harder to become the self-sufficient Amish man she deserves. But in the face of family disapproval and their own fears, will Jenna and Buddy’s courage be enough to give them a forever happiness together?